"And this moment here... this is a moment that you never forget. The moment when the tribute becomes a victor."
―Caesar Flickerman[src]

Victors are tributes who have won previous Hunger Games. Because of this, they receive income from the Capitol for life, are given a special status in their districts and are allowed to live in the wealthiest part of their district called the Victors' Village with their families. Despite the privileges they enjoy, their involvement in the Hunger Games lasts for a lifetime, and they are placed under strict surveillance to ensure that they do not encourage rebellion or dissent against the Capitol. Their primary duty as victors is that they must act as mentors to subsequent tributes from their district in future Hunger Games. They are responsible for courting sponsors, controlling the flow of gifts sent to their tributes in the arena, and have a say in the tactics that the tribute uses before and during the Games. Highly attractive and desirable victors are almost always prostituted by President Snow to citizens of the Capitol, as was the case with Finnick Odair, Cashmere, and presumably several others. Victors are also usually forced to take on special personalities; such as Finnick's flirtatiousness, or Katniss and Peeta's inseparable love. Victors ultimately represent a ray of hope, as they have established themselves as special individuals who have survived the Hunger Games, one of the Capitol's main tools of oppression and tyranny.

Many victors turn to alcohol or drugs after they have won their Games as a means of coping. Some examples can be seen with Haymitch Abernathy or Chaff and their heavy drinking, and the pair from District 6 with their addiction to morphling. These addictions stem from the traumatic experiences and memories of the Games, the demands that the Capitol continues to impose on them, the death penalty on them or their families, and, for those who become mentors, having to train new tributes every year which more likely will end up dying in their Games. Most, if not all, of the victors suffer from some form of PTSD as a result of their experiences in the Games, such as the mental instability experienced by Annie Cresta and the recurring nightmares that both Katniss Everdeen and Peeta Mellark endure following their Games.

After their victories, victors must find a talent or a hobby to take up, for example, Katniss Everdeen's talent was fashion designing, although her stylist, Cinna, secretly made things himself and passed them off as her work.

While victors, regardless of their age when they initially were reaped for the respective Hunger Games, are exempt from further participation until they are no longer of reaping age, this changed for the the 75th Hunger Games, which was also the Third Quarter Quell. Its special rule stipulated that as a reminder to the rebels that even the strongest among them cannot overcome the power of the Capitol, the tributes would be selected from the existing pool of victors. Thus the remaining victors of each district were once again forced to partake in the reaping and participate in the Hunger Games.

The Victory Tour, first implemented in the 11th Hunger Games, occurs six months after the victor's Hunger Games, and is held to keep the memory of the year's Games fresh in everyone's mind. They start in the highest numbered district and count down, skipping the victor's district and saving it for last. In each district, the victor gives a speech commemorating said district's fallen tributes, followed by a dinner with the district's leaders. Prior to returning to their resident district, the victor returns to the Capitol for an interview following up on their life after the Games, with the night concluding with a lavish party at the president's mansion. The Victory Tour concludes with the Capitol throwing a huge feast for the victor's district where all the residents attend.

While a victor is not obligated to work as part of their district's industry following their victory, one of the primary duties as a victor is to serve as a mentor each year for their district's latest slate of tributes for the Hunger Games. In this role, theoretically the mentor is to provide tactical advice on how to survive the Games, assess their pre-existing skills and talents and how best to display them during training and their interview, and serve as a lifeline for their tributes once the Games have started by attracting sponsors and providing sponsor gifts such as food, medicine, supplies, and weapons. This last duty is one of the most crucial to their mentorship duties, as their relative success (or failure) at attracting sponsors is dependent on the impression their tributes make during training and interviews and their performance in the Games themselves, which can have an enormous impact on whether their tribute dies or survives long enough to be crowned victor themselves.

There have been 75 victors throughout the history of the Hunger Games. Just before the 3rd Quarter Quell, 59 victors were still alive. By the end of the Second Rebellion, only seven victors are known to still be alive. They are Katniss Everdeen, Peeta Mellark, Johanna Mason, Beetee Latier, Haymitch Abernathy, Annie Cresta, and Enobaria. 16 died of natural causes, 18 died in the 75th Hunger Games, and the other 34 possibly died during the Victors' Purge and the rebellion.

Additionally, four victors, two female and two male, were featured in the propaganda video shown at the 74th District 12 reaping in the movie. In order of appearance, they were shown with a sword, a shield, a harpoon, and no weapon. Also, Katniss mentioned in The Hunger Games that she remembered an edition from "a few years ago" in which the victor only received a 3 as his training score. Considering that "few" typically means "three to five," Katniss was referring to the victor of the 69th Hunger Games as the two subsequent victors, Annie Cresta and Johanna Mason, are female.

Gloss of District 1, victor of the 63rd Hunger Games.

Cashmere of District 1, victor of the 64th Hunger Games.

Augustus Braun of District 1, victor of the 67th Hunger Games.

Enobaria of District 2, victor of the 62nd Hunger Games. 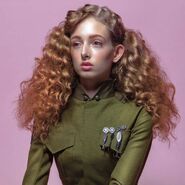 Mags Flanagan of District 4, victor of the 11th Hunger Games.

Finnick Odair of District 4, victor of the 65th Hunger Games. 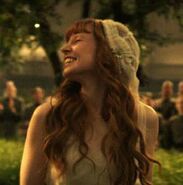 Annie Cresta of District 4, victor of the 70th Hunger Games. 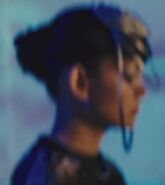 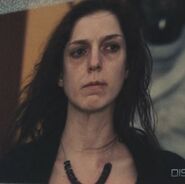 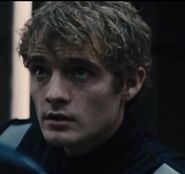 Johanna Mason of District 7, victor of the 71st Hunger Games. 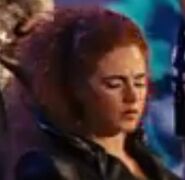 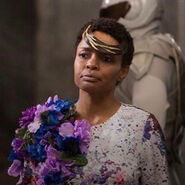 Chaff of District 11, victor of the 45th Hunger Games.

Haymitch Abernathy of District 12, victor of the 50th Hunger Games.

Katniss Everdeen of District 12, co-victor of the 74th Hunger Games.

Peeta Mellark of District 12, co-victor of the 74th Hunger Games.

Community content is available under CC-BY-SA unless otherwise noted.
Advertisement