Deceased (Killed by mutts or Cato)

"Just this one time, I let you go. For the little girl. You and me, we're even then. No more owed. You understand?"
―Thresh to Katniss Everdeen[src]

Thresh was the male tribute from District 11 in the 74th Hunger Games. Strong, powerful and resourceful, he posed a serious threat, along with Cato, to the other tributes participating in the Games.

"I always respected him. For his power. For his refusal to play the Games on anyone's terms but his own."
―Katniss on Thresh[src]

Thresh was reaped into the 74th Hunger Games, along with the female tribute from his district, Rue. Viewed as the physically strongest tribute in the entire Games, the Career Tributes attempted to recruit him for their alliance during the training sessions, but he refused to join them. In training, he scores a 10, but in the film, he scores a 9.

During Thresh's interview, Caesar Flickerman tries to help him to be more comfortable and talk. However, Thresh only answers in curt single word answers and remains surly. This, coupled with his physical appearance, causes him to become a favorite amongst the Capitol for the games. Katniss is extremely impressed with this, and envies Thresh as he shows such silent, deadly physical power and has no need to make the Capitol like him with an angle.

Thresh survived the initial Cornucopia bloodbath. He stood on the last pedestal. When the Gong rings, he was one of the first people to get inside the Cornucopia. After retrieving a water container, backpack and a crescent sword, he is quickly confronted by the District 7 male. The District 7 male tries to stab Thresh with a spear, but he easily knocks the spear out of his hands and slashes part of his face off with his sword killing him. He is then seen running towards the forest while looking back at the District 3 male and the District 7 female push each other.

In The Hunger Games film, he is seen near the southern part of the Cornucopia. He finds a field of wheat, which he uses to his advantage by using the wheat for food and also as a source of cover so he could easily hide. The Careers knew where he was, but saw the field as a threat as Thresh would be at a major advantage if they attacked, so they avoided him.

He comes out of hiding during the feast to claim his backpack with what he needed the most, and overhears Clove's threats to Katniss and taunting her about Rue's death. Furious, Thresh attacks Clove, pulling her away from Katniss and yelling at her, and effortlessly holds her a foot above the ground. Due to Clove's words, Thresh accuses her of killing Rue, which Clove truthfully denies. When Clove sees Thresh holding a large rock, she screams for Cato. In the book, Thresh smashes the rock into her temple, cracking and denting her skull.

In the film, he slams her head-first against the Cornucopia twice, cracking her skull. In the book, Katniss responds to Clove's injury with her thought of "She's a goner." She dies of this injury a short while later. Thresh then asks Katniss what Clove meant about Rue being her ally. Katniss tells him that Marvel killed Rue, and that she sang to her as she died. To honor Rue and to repay Katniss for protecting her, Thresh tells her he'll let her go once, but owes her nothing after that. He then tells her to run, as Cato is approaching the clearing. As Thresh leaves, he takes not only his own backpack, but Cato's as well, forcing Cato to chase him instead of Katniss, putting her in less danger to repay her further. Meanwhile, Cato tries in vain to revive Clove until the cannon signaling her death fires; he then goes after Thresh. 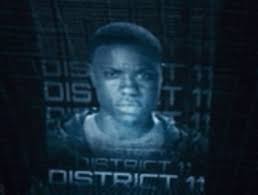 Although his death is not shown directly, it is revealed in Mockingjay that Thresh got killed by Cato in an unspecified manner. There is a discrepancy between the film and the book in the manner that Thresh was killed.

In the book, Thresh is placed 5th, before Foxface but in the movie, Thresh dies after Foxface, resulting in finishing 4th place, which is a very high score for a tribute from a poor district like 11. In the movie, you can hear the wolf mutts howling and Thresh screaming while being attacked by them. A cannon sounds and his picture appears afterwards to confirm his death.

Thresh's muttation was said to be the biggest of them all, once again referring to his massive build. Katniss can tell it was Thresh because of his powerful back legs and that no other tribute could have leapt that high. His mutt was killed by Katniss when it tried to leap on top of the Cornucopia as Cato, Peeta and Katniss tried to stay away from the rest of the pack.

In the Hunger Games, Thresh only had one known tactic; to occupy a portion of the arena and to seldom leave its boundaries. In the film, Thresh is seen participating in the Cornucopia bloodbath. Thresh chose to enter a field of wheat that was as tall as Peeta's shoulders, seeing the area as both a threat and a source of food, shelter and safety. He saw it as a place of safety particularly because it resembled his home District 11.

Peeta stated that the Careers didn't want to attack Thresh while he was there since he would have a major advantage.

During the feast in the book, Thresh kills Clove, the female tribute from District 2, by denting her skull with a rock since he hears Clove taunt Katniss about Rue; though in the film, he kills Clove by pinning her against the Cornucopia and then slamming her into it, cracking her skull.

In the film, it is shown during the Cornucopia bloodbath that Thresh killed the male tribute from District 7 by knocking away the attacker's spear and slashing his throat with his curved sword before running off. It is likely that he only did this because the tribute was trying to kill him, If he didn't attack Thresh, he wouldn't have killed anyone in the bloodbath.

When Katniss and Peeta go to District 11 on their Victory Tour, Katniss gives a speech about Thresh. She says she only spoke to him once, but respected him for his strength and refusal to play the Games on anyone's terms but his own (the Careers wanted him to join their alliance, but he refused), and thanks him for sparing her life. Katniss and Peeta thank District 11 for their tributes.

Peeta then rewards each of the families from District 11 with one month of their victor gifts every year for the rest of their lives.

Thresh shows mercy towards Katniss when they met in the arena, even at a time when he had the advantage in terms of combat, as he believed that he owed her for being in alliance with Rue, the young female tribute from his district. Through this action, Thresh is shown as having a certain degree of honor and dignity. By attempting to avenge Rue, Thresh also showed a side of kindness, which, in this case, is directed towards an innocent twelve-year-old girl. Another aspect of Thresh's personality is that he is vengeful. Other of Thresh's actions that reveal his personality include his choice of solitude throughout the duration of the Games, demonstrating his preference to work alone.

Thresh was one of the main competitors in the 74th Hunger Games. Being as strong and huge as he was, it was obvious from when you first saw him, Thresh would pose a problem if you were to face him. He commanded respect and was feared by virtually everyone in the arena, even the whole Career pack due to being taller, bigger and physically stronger than them. Being from District 11, his knowledge of plants helped him in the field, where no one else dared to go, and it became a hide-out as well as a potential food source. Katniss herself had thought that if she were a sponsor, Thresh would be who she would sponsor. He was definitely someone not to be underestimated. Thresh's physical aptitude was often complemented by Katniss. It is also revealed in training that when the Career Tributes asked him to join their pack, he refused as he didn't want to be viewed as a "capitol lapdog" like them. 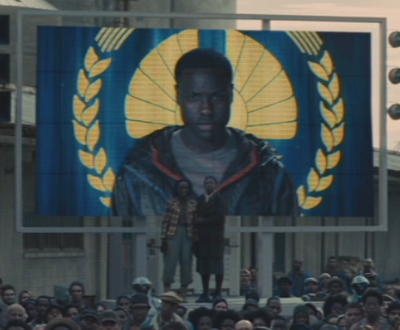 Thresh had only two known family members, an old hunchbacked woman, presumed by Katniss to be his grandmother, and his sister, whom Katniss referred to as bulky and strong looking like Thresh.

"Just this time, Twelve. For Rue."
―Thresh to Katniss about Rue[src]

Thresh liked Rue and took pity on her since she was so young and nice and felt she did not deserve to be in the Hunger Games. He cared about her because when she died, he became sad and infuriated by her death.  In the film, during training Thresh noticed Rue had stolen Cato's dagger when he started accusing another tribute; he grinned and shook his head at her in admiration. During the feast, Thresh overheard Clove taunting Katniss about Rue's death. Thresh grabbed Clove off Katniss, grabbed her by the throat while holding her one foot off the ground, and yelled at her about Rue. He then killed Clove by cracking open her skull with a rock. However in the film, he slams Clove against the Cornucopia leading to her death.

During the feast, Thresh saved Katniss from being killed by Clove. Katniss was shocked at his sudden appearance. After Thresh avenged Rue's death by crushing Clove's skull with a rock, he asked Katniss in a gentle way about Rue. In the film, all he said was, "Just this time Twelve. For Rue." Thresh was touched that Katniss took care of Rue and tried to protect her from the other tributes and felt that he owed her. He spared Katniss' life and told her to run as Cato would be there soon, as he had heard Clove's screams before she died. Thresh also took Cato's backpack, as it would force Cato to chase him instead of Katniss, allowing her to escape. This act may have resulted in Thresh's death, which shocked and saddened Katniss, as she liked him and wanted him to win if she or Peeta did not.

During the Victory Tour, Katniss honored Thresh by including him in her speech. She stated that she didn't know him, but deeply respected him for his strength and his refusal to play the Game on anyone's grounds but his own. Katniss also thanks Thresh for sparing her life.

Thresh had dark skin and very cropped dark hair. He is described as being the tallest tribute, having strange golden brown eyes and muscles like an ox. He was larger and more muscular than Cato. Katniss often thought of Thresh as a "physical wonder". His entire physical appearance was the reason why he was so greatly feared by all the tributes, including most of the Career pack.

It was noted that Thresh looked even bigger and well fed since the games had begun. (He was from District 11, a poor district, where no one gets enough to eat). In the film, Thresh is shorter than both Marvel and Cato and less muscular/smaller than the latter, but still muscular and somewhat taller than the other tributes.

Like many other characters in The Hunger Games series, Thresh's name has an actual meaning. "Thresh" is a method of harvesting grain that involves flailing the plant around.

Retrieved from "https://thehungergames.fandom.com/wiki/Thresh?oldid=916418"
Community content is available under CC-BY-SA unless otherwise noted.