I am happy i seen the first one i am happy for you guys and katniss you are the perfect nice girl keeping your sister alive i knew you would be strong like a person i will never forget about you guys and even that you two did a great team work. Peeta i know you are a really nice handsome person to save katniss working as team works and i am proud of you also you two are my fav. i cant stop thinking of you guys.

I believe he had an artificial or prosthetic leg attached, but I don't know if this was after the 74th or 75th Hunger Games. —Preceding unsigned comment added by 24.80.113.218 (talk • contribs)

I really think Peeta and Katniss shared Cato's death. I mean, he pushed him into the mutts, which left bloody and raw, and Katniss ended up shooting him in the head.

is it really a good idea?

In a way I think it could be a good idea to make Mockingjay into two films. It'll then last longer and make it possibly more like the book than The Hunger Games was (which was well and truly amazing). It also keeps the suspence going and really have us on the edge of our seats.I also think that Josh Hutcherson will do exeptionally well at playing Peeta as he has bee hijacked because he really is an amazing actor.

I think it is a great idea but I also don't know how I will survive the next couple years of waiting for the other movies!

In the bit when peeta throws katniss the bread isnt he meant to be 12 or is that just my mind going crazy?

Because he looks to muscular and old to be 12

for the occupation just saying ummm he's also a painter, tribute & a victor

and you could add rebel to that list too

Someone, please, fix this error

Katniss taught him a simple two note melody, not the four note one! Someone please change that, it won't allow me to change it. It's near the photos of him with the spear and Katniss and him by the rocks. Thank you.

If I'm not mistaken, the bruise that led to Peeta's amputation was not the sword one Cato inflicted at the beginning of the games - which was "out of danger" after Katniss gave him the shot - but the mutt's gash at his calf at the Cornucopia, combined to the tourniquet Katniss applied and that remained there for several hours... if so, we need to change that in the description of the event. Turdaewen (talk) 19:00, February 19, 2013 (UTC) 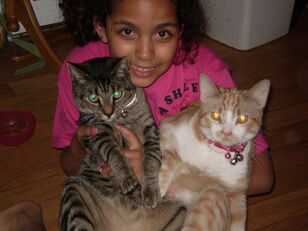 I like him but he is such a weiner hahaha sorry.

Peeta reasoning for the amputation of his leg

Peeta had 2 reasons for his legs to be amputated first was from the sword from Kato and mutts that was attacking peseta and katniss at the cornicopia.