"How odd of you two to find it amusing. You know your mentor is your lifeline to the world in these games. The one who advises you, lines up your sponsors, and dictates the presentation of any gifts. Haymitch can well be the difference between your life and your death!"
―Effie Trinket defending Haymitch while summarizing the job of a mentor[src]

Mentors are victors of past Hunger Games who must train subsequent tributes from their District. There are no gender restraints; a male victor can train a female tribute and vice versa. There can be two male mentors or two female mentors, though usually there is one female and one male for the respective male and female tribute. Due to a number of different factors, a pair of tributes may have just only one mentor. Katniss Everdeen and Peeta Mellark only had one mentor for both the 74th and 75th Hunger Games, Haymitch Abernathy. This was due to him being the only living victor of District 12.

The mentor program was established with the 10th Hunger Games. Though in later events, the mentors were previous victors of the Games, in at least their first usage they were top-performing students of the Academy.[1]

"For those of you who don't know, I'm Dr. Gaul, the Head Gamemaker, and I will be mentoring your mentorships."
―Dr. Volumnia Gaul was the true architect of the mentor program and the Games

The mentor program was said to be the idea of Casca Highbottom, the dean of the Academy, who originally created the Hunger Games.[2] In truth, Highbottom abhorred the Hunger Games and the project was in fact the brainchild of Dr. Volumnia Gaul, the head Gamemaker who was the true architect of the Hunger Games. For the 10th Hunger Games, 24 of the top-performing Academy students were invited to be mentors, each paired with a tribute from one of the districts. It was their job to then groom their tribute for the Games, with the idea being that those who did well would receive a monetary prize. In this early stage, there were few specific rules or guidelines for mentors. Dr. Gaul regularly visited the mentors, encouraging them to consider the nature of the Hunger Games and also asking them to brainstorm ways to get people more engaged in the Games, as viewership was low at the time.[3] Ultimately, Dr. Gaul considered the 10th Hunger Games a failure and felt that it was a mistake to involve the students of the Academy, as the fact that several were killed in a bombing of the Capitol Arena presented the Capitol as being far too vulnerable.[4] 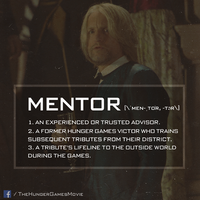 Victors are neither required to either go to school nor to work in their district's industry; however, they are required to work as mentors who train their district's future tributes for the rest of their lives. A mentor's primary job is preparing their respective district's selection of tributes for life in the arena. Having first-hand experience of the Games by virtue of being victors themselves, mentors can provide invaluable knowledge and tips to their tributes on how to survive against their fellow tributes as well as out in the arena. By developing potential strategies based on their skills (or lack thereof), a mentor can play an important role on the overall survival of their tributes and their chances of victory.

Mentors also help prepare their tributes for their public interview with Caesar Flickerman, particularly focusing on helping their tributes make themselves look appealing to prospective sponsors. As it is ultimately up to the mentor to help procure these sponsors, they are crucial in this process. Their relative success (or failure) to get sponsors for their tributes depends strongly on how well their tributes impress or appeal to them. Should a tribute gain a sponsor, mentors hold power over the gifts that go into the arena for their tributes and when they are sent in.

Mentoring can be an emotionally and psychologically damaging job, particularly for mentors that hail from districts such as 10, 11, or 12, where victory is a rarity for their tributes. Mentors may become depressed, descend into damaging vices, and/or become apathetic to the following year's tributes due to the sheer number of tributes they have mentored in the hopes of victory ultimately dying. Haymitch is a prime example of this, who prior to the victory of Katniss Everdeen and Peeta Mellark's victory in the 74th Hunger Games had not mentored a single District 12 victor in the 23 years since he himself became one in the 50th Hunger Games. He became an alcoholic and showed little concern (initially) of the prospects of Katniss or Peeta's victory in the 74th Hunger Games.

All mentors live in the Victors' Village, a small gated off portion of every district that is made specifically for the victors of the Hunger Games. The houses are moderately-sized, luxurious mansions generally filled with furniture, tapestries, amenities, and plentiful amounts of food that the rest of the district's citizens typically do not have access to, especially for poorer districts.

Each victor is assigned their own unique house, likely tailored and constructed to their liking. Haymitch has a wooden house, which looks old and haunted. Katniss' is made out of bricks and is rather clean, as the building itself is only here for a single year. In The Hunger Games: Catching Fire, however, the Victors' Village is depicted with all the houses being the same.

These are not confirmed but are presumed, especially in the Career districts where there are more victors. The exception are those for the 10th Hunger Games from The Ballad of Songbirds and Snakes, all of which are listed directly in the title. Older victors such as Mags Flanagan could also continue their work as mentors despite younger victors being eligible, as such mentors aren’t always the newest victors from their District. Not all victors are mentors too, as with the rare case of Annie Cresta, Katniss could not recall her during previous years broadcast of the games, as such if a victor’s mental health is damaged too much, mentorship is not a requirement.