The Hunger Games Wiki
Register
Don't have an account?
Sign In
Advertisement
in: Deceased, Males, Tributes from District 1,
and 6 more
English

"As I try to avoid looking at his family, I learn that his name was Marvel. How did I never know that? I suppose that before the Games I didn't pay attention and afterwards I didn't want to know."
―Katniss Everdeen about Marvel[src]

Marvel is a minor antagonist in The Hunger Games. He was the male tribute from District 1 in the 74th Hunger Games and a member of the Career pack.

Marvel was born in District 1, one of the wealthiest districts of Panem, and trained most of his life for the Hunger Games, specializing in spears. During the 74th Hunger Games, he was a part of the Career pack along with his district partner, Glimmer. His odds were the same as Clove's, making him the third-strongest of the Career pack, after Clove and Cato respectively.

As a Career Tribute, Marvel was strong, ruthless, arrogant and very confident. It is also mentioned by Katniss that he might not have been the sharpest tool in the shed, but his size, brutality and capability with weapons made him an extremely deadly tribute.

During the opening ceremonies, he and his district partner, Glimmer, were spray painted silver and were wearing tunics. In the movie, Glimmer and Marvel wore fuchsia outfits belted out in sequins and feathers, representing their District industry, luxury. Katniss points out that they both looked very luxurious. The pink outfits were quite stunning and Marvel and his partner Glimmer are seen dressed in bright pink outfits in the first chariot of the parade.

He showed great skill at fighting and throwing spears, which made him deadly at a distance. While the District 3 female was on the Gauntlets, she was tripped and he and the other Careers laughed. During training in the film, he saw Peeta's weakness and viewed him as a "meal" until Peeta's true strength was revealed, by throwing a 100 pound metal ball at a rack of spears, leaving him and the other Careers surprised. He received a very high training score of 9. Marvel showed the same arrogance as many of his fellow careers, but lacked the ruthless discipline of Cato and Clove (probably because they were from District 2, which contributes heavily to the Capitol's military); however, unlike his fellow tribute Glimmer he was very well-trained in his weapon of choice, which was a spear, specifically a javelin.

During his interview with Caesar Flickerman, he wore a blue suit with matching blue trousers and was presumably trying to be funny.

He rises on the pedestal next to Clove and Katniss. When the gong rings, he runs to the Cornucopia to battle for supplies like most of the other tributes, and picks up a kukri. He spots the District 8 male, slashes his throat and repeatedly stabs him to death with the kukri. He watches his district partner, Glimmer kill the District 6 female, then attacks the District 10 male. Later on, he tries to swing an axe at him, but the boy dodges his attack. He then interrupts a battle between the District 3 male and the District 7 female over a backpack by taking it away. The District 3 male grasps on his axe, but Marvel pushes his backpack into his face. He notices the District 7 female on the ground, so he chases her and strikes her in the heart with a spear, killing her.

Marvel helped the Careers chase Katniss up a tree. It appears in the film he noticed her before any of his fellow careers do by yelling 'There she is!' Realizing that it will be difficult to attack her, he and the other Careers form a camp below her. While in her tree, Katniss sees Rue, the female tribute from District 11, in a nearby tree. Rue points out a tracker jacker nest hanging near her. Katniss takes the knife that Clove tried to kill her with at the Bloodbath (in the book it is mentioned that it is serrated near the handle, making it handy for sawing things) out of her backpack and while the Careers are distracted by the anthem, partially destroys the branch that held the tracker jacker nest. When the anthem finishes, she is forced to stop, but finishes the job the next morning, and pushes the nest as far away from her as she can. The nest hits the ground and bursts open, and he, Cato and Clove was stung many times, forcing the Careers (minus Glimmer and the District 4 female in the book, because they succumb to the stings and die) to flee to the nearby lake.

After Marvel and the other Careers recovered from their tracker jacker stings, they began to hunt for more tributes. When Katniss and Rue formed their plan to destroy the supplies, Rue lights a fire as a decoy. The Careers were then distracted by the fire and take off to kill the tribute who started it. Marvel and the others set out to find Rue, but after the supplies were destroyed by Katniss setting off the landmines, the Careers come back just as Katniss drags herself into Rue’s hiding place. Because he can’t think clearly, Cato blames the District 3 boy, and Marvel watches Cato snap the District 3 boy's neck. Marvel and Clove calm Cato down, and tell him that the tribute who destroyed their supplies was probably killed as well in the explosion. They wait for night to see the faces of those who were killed, but when they find that the tribute did not die, the Careers then set out to hunt the other tributes.

Cato sends Marvel to kill Rue. He successfully did that by trapping Rue with a net when she was on her way to light the last fire she and Katniss planned to light. As Rue screams for help, Marvel throws a javelin into her abdomen. In the book, Katniss witnesses this and shoots him through the neck. Marvel tries to remove the arrow by pulling it out, but doing this resulted in his death. In the film, Katniss reaches Rue first and cuts the net. Marvel throws a spear and Katniss dodges it, but it hits Rue in her abdomen. Katniss skewers him in the heart with an arrow, killing him.

Rue removed her spear but already lost a significant amount of blood. Overall, Marvel placed 8th out of 24, which was higher than his female counterpart, Glimmer.

When the wolf muttations of the fallen tributes appeared chasing Cato, Marvel's was one of the pack, with brown fur and being particularly taller and skinnier than the other mutts. It is unknown if the muttation of Marvel survived the battle between the pack and Cato, Peeta, and Katniss.

In Catching Fire, Katniss and Peeta go to District 1 on their Victory Tour. Katniss feels uncomfortable, as she was responsible for the deaths of both Marvel and Glimmer, Marvel's district partner. She spots his family, and she tries to not look them in the eye.

In the film, Katniss also has a brief hallucination to her killing Marvel as she is about to kill a turkey. Gale comforts her afterward but she keeps quiet about what she saw.

In the book, his most notable victim was Rue. In the film, he kills Rue the same way in the book, but throws his spear into her abdomen after Katniss cuts Rue out of the net. He also seemed to have been aiming the spear at Katniss, until she dodged it and shot him in the heart. In the film, Marvel is shown to kill two tributes in the Cornucopia Bloodbath. After the District 8 male attempts to stab or punch him, Marvel slashes his throat with his kukri knife, throws him onto the ground, and then uses the knife to stab him until he dies. He kills also the District 7 female by skewering her with his spear while she was on the ground.

During the Games, Marvel (being a Career tribute) had medicine, food, water, and other supplies from the Cornucopia. These supplies were blown up when Katniss destroyed the mines planted by the District 3 boy, and Marvel was left only with his spears and a backpack. The backpack held some knives, two extra spear heads, a flashlight, a small leather pouch, and a first-aid kit. However, it only included meager rations - a bottle of water and a pack of dried fruit - which Katniss saw as a sign of extreme arrogance because the Careers had such a bounty at camp. 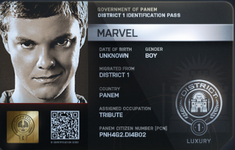 Katniss thought Marvel as "arrogant" after finding a pack of dried fruit on him following Rue's death, due to the fact that he had bountiful resources with the career's supplies. Nevertheless, during the 74th Victory Tour, she felt guilty for not knowing his name during the games.

During his interviews, he seemed to be going for a comedic approach, most likely to appeal to more sponsors. However, at the start of the games he ruthlessly killed at least two tributes, and later Rue, a twelve year old girl.

In The Hunger Games: Tribute Guide, it is mentioned that Marvel is "not the sharpest tool in the shed with his fists or brute force but sharp with spears and was properly the best from long distance."

Marvel is described rather more skinny and tall than muscular and fit, unlike the other Careers. In the movie, he has short light brown hair and green eyes. According to the movie, he was the second tallest tribute at 6'3, after Thresh at 6'6" (book) 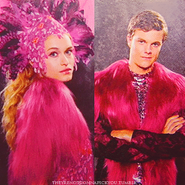 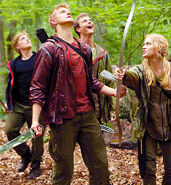 The Careers attempt to kill Katniss

Marvel and Glimmer during the parade

Marvel and Glimmer during the parade

Marvel and Glimmer during training

Marvel trains with a spear

Marvel, along with Cato and Clove, target Peeta during training

The Careers laugh at Peeta

The Careers react with surprise to Peeta's abilities

Marvel in line for his interview

Marvel during his interview

Marvel on his pedestal

Marvel during the Cornucopia bloodbath

The Careers prepare to kill the District 8 female

The Careers observe Katniss from the ground

Marvel is shot by Katniss

Marvel appears during one of Katniss's PTSD episodes