The night before the start of each Hunger Games, Caesar Flickerman hosts an interview with each of the tributes. The tributes dress up so as to cause an impression on the Capitol. Caesar dressed with a suit, hair, lips, and eye color all the same color. Caesar wears a different color wig every hunger games. In the 74th, it was blue, in the 73rd, it was crimson. Caesar asks them about their life back home, their time in the Capitol so far, their training score, and the reaping. He is noted to try to help all the tributes through their interview. The interviews are in order of districts with the female preceding the male tribute. Each interview is allotted three minutes per tribute. The main purpose of the interviews is to show the rest of the Capitol a little about each tribute to help them choose their favorite. There is always an interview with the tributes before each Hunger Games begins, and another with the victor after the Games are over.

The interviews were introduced in the 10th Hunger Games as The Hunger Games: A Night of Interviews, hosted by Lucretius Flickerman, a colorful weatherman from Capitol TV. It was held before a live audience at the Academy and broadcast throughout Panem. At the time of these Games, the Games were not generally popular with citizens of the Capitol and these interviews were an attempt to change that, along with the introduction of the mentorship program, as well as sponsorships and betting on the tributes. It was hoped that by getting to know the tributes better, the audience would become more interested in their fates. The mentors also appeared alongside their tributes for these interviews, due to the newness of the mentorship program, which for these games featured top-performing students from the Academy.

Before the interviews were even held, a number of tributes had already died, many of them in an explosion during a tour of the Capitol Arena. Thus, there were only a limited number of interviews and each tribute and mentor pair were given a maximum of ten minutes. Lysistrata Vickers had her tribute, Jessup Diggs, lift her over his head to demonstrate his strength. Io Jasper's tribute, Circ, revealed that he could start a fire with his glasses and Io suggested angles and times of day that would be conducive to this. Juno Phipps admitted that she was at first disappointed to get the male tribute from District 8, Bobbin, until he told her that he knew five different ways to kill someone with a sewing needle. The girl from District 4, Coral, put on a show with a broomstick to demonstrate how she might kill using a trident. Domitia Whimsiwick engaged the interest of the crowd by having her tribute, Tanner, talk bout his experience in slaughterhouse techniques.

The highlight of the evening, however, was Coriolanus Snow with Lucy Gray Baird. The two appeared together, Coriolanus in a neatly pressed uniform and Lucy Gray Baird in her rainbow dress which had been expertly repaired and spiffed up by Coriolanus's cousin, Tigris. Lucy Gray Baird than sang a song she had composed herself, words set to an old tune, called "The Ballad of Lucy Gray Baird." By the time she was down, one could hear a pin drop in the auditorium. Coriolanus knew that the song would make sponsor gifts pour in for her, but the song also made him deeply jealous, due to its reference to a lost lover.[1]

Each of the 24 contestants in the 74th Hunger Games were given an interview. Some of the noted ones were:

After the 74th Hunger Games

Peeta and Katniss both appear for the post-Games interview. Katniss is told by Haymitch Abernathy that they must act as though they are madly in love and that she would rather have died than to lose Peeta. Due to their heroic "berry scene," President Snow is not very happy with them for showing them up. Their stylists (Cinna for Katniss and Portia for Peeta), prep teams (for Katniss: Venia, Octavia, and Flavius), escort (Effie Trinket) and mentor (Haymitch Abernathy) are all introduced. Katniss is dressed as an innocent young girl in a yellow dress that resembles candlelight to draw attention away from her rebellious actions. They show highlights of the whole Hunger Games and it is especially hard for Katniss to re-live. When President Snow gives the crown to Katniss, he gives her a venomous look and she knows that he will get revenge on her.

To wrap up the Victory Tour, there is an interview with Caesar. During, he asks how the victor is doing. During the interview in Catching Fire, Peeta proposes to Katniss. This was Katniss' idea and was the signal for a planned uprising in District 8.

Each victor reaped for the 75th Hunger Games participated in an interview with Caesar as is customary, a process not new to any of them. Most complained or showed sadness of the fact that they would have to participate in yet another games, while some, mainly the careers, boasted of their fame or showed the same bloodlust as before. Some notable interviews include:

At the close of the interviews, Peeta and Katniss led the victors in a spontaneous show of unity by holding hands. Some, mostly the career victors, are reluctant at first, but eventually all the tributes joined in to form an unbroken line, sending the crowd into a chaotic uproar. The chain of hands, though seen to some as a symbol of the victors' friendship and the first public show of unity among the districts since the Dark Days, was meant as a symbol of rebellion, saying that even the dreadfulness of the games couldn't sever the bond the victors had formed nor destroy the united strength they held. Nonetheless, this did not stop the tributes from battling to the death once the Games began the following day.

During these interviews, as Katniss and Peeta watched them on the train, Katniss noted it as being overwhelming due to the high number of tributes. When Haymitch was interviewed, Caesar asked Haymitch, "So, Haymitch, what do you think about the Hunger Games having 100% more competitors than usual?" Haymitch responded, "Well, they'll still be 100% stupid as usual, so I figured that my odds will be roughly the same," making the audience laugh. 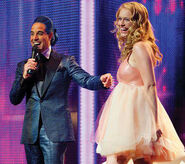 The rest of the tributes wait while Glimmer is interviewed. 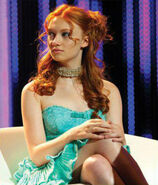 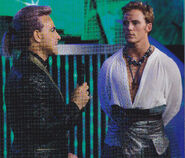 The tributes holding hands as a sign of rebellion. From left to right, top to bottom: Cashmere and Gloss, Enobaria and Brutus, Wiress and Beetee, Mags and Finnick, District 5 tributes, Morphlings, Johanna and Blight, Cecelia and Woof, Distrct 9 tributes, District 10 tributes, Seeder and Chaff, Katniss and Peeta.

Woof, Distrct 9 and 10 tributes and Seeder at the interviews.

Johanna, Blight, Cecelia, Woof and the female from District 9.