"Let them have a taste of their own medicine."
―Enobaria agrees with the Hunger Games involving the Capitol children

Enobaria is a female from District 2 and the victor of the 62nd Hunger Games. She competed again in the 75th Hunger Games and third Quarter Quell against other victors.

When Enobaria came of age, she participated in and became the victor of the 62nd Hunger Games. During her Game, she became famous for ripping another tribute's throat out with her bare teeth, so she later altered her teeth into sharp points, like fangs, and had them inlaid with gold.

After she volunteered, she showed extreme enthusiasm and an apparent bloodlust. She bared her fangs and raised her fist in the air. She wore a gold outfit and a matching headband.

While training, Enobaria fought Katniss to see her skills with a sword, though it was obvious that neither one of them was fond of each other and in no way wanted to form an alliance.

Enobaria wore a gold gown to the interviews and later joined hands on stage with the other victors before the start of the Quell to show their strength, though she was reluctant at first. However, in the film she is seen with a bright smile compared to the other Career's rather unenthusiastic looks, suggesting she is much more rebellious than her fellow careers.

Enobaria was located on the pedestal next to Woof. When the bloodbath started, Enobaria made it to the Cornucopia after Katniss and Finnick Odair had their pick in weapons. When Katniss shot an arrow at her, she was able to dodge it by diving back into the water before it could hit her. The Career alliance, formed by Enobaria, Brutus, Cashmere, and Gloss, stayed at the Cornucopia. During the bloodbath she killed Cecelia and possibly more.

Throughout the Games, the Careers stalked Katniss, Peeta, Finnick, Mags, Johanna, Blight, Wiress, Beetee, Chaff, and the Female Morphling, as they regulated through the alliance of the rebellion they all wanted.

Katniss' alliance made its way to the Cornucopia to get a figure out the clock mechanism of the arena. The Careers attacked, leading to the deaths of Wiress, Cashmere, and Gloss. Enobaria attempted to stab Peeta with her sword, but Finnick stepped in the way and received the blow to his leg before she and Brutus left, then stalked the group again until Beetee set his plan into action. Together, Enobaria and Brutus chased Johanna and Katniss across the island, until Johanna dug out Katniss' tracker and made her appear dead so the two would pass her by. At an unknown point, they split up. Brutus found his way to Chaff and Peeta and fought them. In the battle, Brutus killed Chaff, but Peeta killed Brutus, leaving Enobaria and Finnick as the only remaining Career Tribute.

Enobaria fought her way to Beetee and managed to stab him so he could not complete his mission of destroying the arena. She was chased off by Finnick while Katniss figured out Beetee's intentions. By the time Enobaria and Finnick had made it back to Katniss and Beetee, Katniss had destroyed the arena and called a stop to the Games, leaving only six tributes alive. She was one of the three tributes picked up by the Capitol hovercraft.

Plutarch Heavensbee was able to rescue Beetee, Finnick, and Katniss. However, Enobaria, Peeta, and Johanna were apprehended by the Capitol. While Johanna was tortured with electroshock tactics and Peeta was being tortured by hijacking, Boggs speculated that the Capitol let Enobaria go home as they were unable to retrieve her in the rescue mission that brought the others to District 13. When District 2 was conquered and District 13 had shown them that they were needed in the rebellion, Enobaria joined the rebels. Enobaria's life was spared by the rebels because of the Mockingjay deal that Katniss had President Alma Coin agree to, since Katniss felt that was only fair, though she believed they would not torture her as District 2 was still on the Capitol's side at that point.

After the war was finished and the execution of President Snow was all that was left on the agenda, the only remaining victors in all of Panem were called to discuss having a final Hunger Games that only Capitol children would be part of. Enobaria, Beetee, Annie, Johanna, Katniss, Peeta, and Haymitch were the only surviving victors. Only after President Snow was captured did she join the rebels. Whether the 76th Hunger Games were to occur would be decided by a vote of the remaining victors. Enobaria, Johanna, Katniss, and Haymitch all said "yes" to another Hunger Games. It is likely Enobaria went back to living her life in District 2 after President Snow's execution.

In the film adaptation, Enobaria is first seen when Katniss enters the room where the remaining victors have gathered. President Coin proposes a final Hunger Games involving the children of those from the Capitol, and after Johanna Mason votes in favour of one final Games, so does Enobaria, saying they should have a taste of what it involves.

She is then seen once again the next day when the remaining victors gather with President Coin at the execution of President Snow. She is standing in-between Beetee Latier and Annie Cresta and watches as Katniss approaches Snow ready to execute him. She is not seen again, but it is presumed - much like in the book adaptation - that she returns to District 2 to live out the rest of her life.

Like most Career tributes, Enobaria is strong, aggressive, and bloodthirsty (quite literally as she tore open her final opponent's throat with her teeth in her first Games). The people of the Capitol seemed to like her, as she was not tortured like Peeta Mellark and Johanna Mason following the 75th Hunger Games. She was even thought to have been freed as she seemed like the kind of person who would be on the Capitol's side. However, her approval to have a final Hunger Games with Capitol children, to give them "a taste of their own medicine", indicates that her vicious nature may have manifested from hatred of the Capitol and that she desired revenge. Also, despite her viciousness, there is no indication that she considered the Hunger Games to be a competition of honor, unlike many other tributes from Career districts. She showed a soft spot when she joined hands with Katniss and the other tributes before they were forced to compete in the games.

As a victor from District 2, she probably killed a considerable amount of tributes in the 62nd and 75th Hunger Games.

In the novels, Enobaria is not described in great detail, but a few features are mentioned: Her most distinctive feature is her teeth, which have been cosmetically altered so each tooth ends in a sharp point, and inlaid with gold. She is physically strong due to the training she received in District 2 and is most likely in her early 30s. In the films, she is portrayed with light brown skin and long brown hair, which is usually tied back into a ponytail. 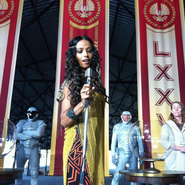 After being reaped in the Third Quarter Quell 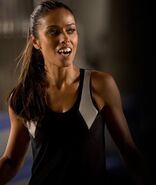 Diving into the lake towards the corncupia. 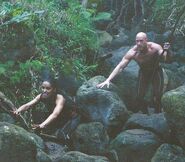