"She sacrificed herself to save me, and I didn't even know her name."
―Peeta Mellark on the Female Morphling's sacrifice.[src]

The District 6 female ("the Female Morphling") was the female tribute from District 6 in the 75th Hunger Games. She was also the victor of an unspecified Hunger Games in which she used camouflage to hide until the others were dead. She eventually became a morphling addict sometime after her Games finished.

The District 6 female tribute participated in a previous game and won. After her Games, she turned to a drug called morphling to be relieved of the painful memories. She is called a "Morphling" because she used the drug so much that she became addicted to it. Her district partner was also a morphling. At an unknown point, Haymitch Abernathy took her and her district partner aside and informed them of a plan to get Katniss Everdeen and Peeta Mellark out of the arena.

During the training sessions, the District 6 tributes were seen at the painting table practicing camouflage. The two tributes painted each other and were shown to be mentally unstable. She is also shown painting Peeta's arm in the training center. During her private session with the Gamemakers, the female tribute showed them her camouflage skills.

During the interviews, she wore a black leather jacket and matching pants. She later joined hands with the her fellow victors as a sign of strength and rebellion.

The District 6 female survived the initial Cornucopia bloodbath. At the Cornucopia, it is most likely she did not participate and just ran away from the terror. In the film, when Katniss is running on one of the spokes, she looks to her left and sees the Morphling running into the jungle along with the District 5 female. She managed to survive whilst her district counterpart did not.

Though not a lot of information is known about what happened to her before her death, in the film, she did not have a lot of supplies or weapons due to her running away from the Cornucopia. However, because she was camouflaged behind Peeta when he, Katniss, and Finnick were fighting off the monkey mutts, it is presumed that she remained camouflaged throughout the first night.

During the orange monkey attack, Peeta was distracted by Katniss. A monkey was about to kill him when the Morphling jumped in the way to protect Peeta. After Peeta had fought off the monkey, he took her body to the beach and held her. The Morphling took some of her blood and drew a flower on Peeta's cheek, which he commented on, saying that it was lovely. The Morphling smiled and soon after, bled to death. Peeta took her corpse to the water and let it drift off until a hovercraft came to take it away. In the film, she dies a similar way, but Peeta tells her to focus on the colors in the sky, giving her a sense of peace, as she bleeds to death in his arms. He then lets her body float and Katniss and him watch as a hovercraft lifts her corpse. She places 14th out of 24th.

She hid during her games using her camouflage skills. 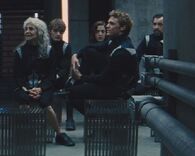 Districts 4, 5 and 6 observe Beetee as he leaves.

Distrcit 6 Female after having saved the life of Peeta.