Location In The Present

"One of the outer districts, this is nonetheless a crucial one. These brave and hardy workers descend deep into the earth each day to mine the coal that keeps our nation running."
―Description from The Hunger Games: Tribute Guide[src]

District 12 was the smallest and poorest of the thirteen districts of Panem. Located in Appalachia, it had a population of around 10,000 people prior to being firebombed by the Capitol. District 12's main industry is coal mining, but after the Second Rebellion, their main industry was converted to medicine. District 12 is the home of victors Katniss Everdeen, Peeta Mallark, Haymitch Abernathy, and Lucy Gray Baird.

District 12 consisted of four major areas: the Seam, the merchant section, the Victors' Village, and the Hob.

"District Twelve. Where you can starve to death in safety."
―Katniss Everdeen[src]

The Seam was the poorest part of District 12 where the Everdeen and Hawthorne families lived. It was located on the border adjacent to the unmanaged forests of District 12. Food was extremely difficult to acquire and many families lived in abject poverty. Many who lived there lost families due to mining accidents or from starvation. Katniss mentioned that they only had electricity a few hours a day, so they mostly used candles for light. As a result, any adult who reached elderhood was venerated. In contrast, those who were well fed and young were scorned.

Early in the mornings, the streets of the Seam were crowded with exhausted coal miners heading to work, who faced the lethal risks of collapsing caverns and the odorless but noxious fumes of carbon monoxide on a daily basis. One safeguard in the mines was a canary who would sing - when the canary went silent, it indicated the mine air was no longer safe to breathe. With the primary outputs of coal in the region, everything in the Seam seemed to be coated in a layer of coal dust.

Residents of the Seam typically have dark hair, grey eyes, and olive complexions. Prim and Mrs. Everdeen were considered exceptional with their blonde hair and bright blue eyes.

Considered to be a step-up in socioeconomic status from the Seam, the mayor and his daughter lived in the merchant area along with other families, such as Peeta Mellark's. By District 12's standards, residents in this section were considered financially well-off, with merchants' homes doubling as their shops by living upstairs.

The merchant section was a center for trading and buying goods, where trades to the Capitol and occasionally other districts were also made.

The merchant class' appearances distinguished them from the residents of the Seam, as they typically had blonde hair and blue eyes. Mrs. Everdeen originally lived in the merchant section prior to marrying her husband and moving to the Seam.

The Hob was District 12's black market, notably where Katniss and Gale sold or traded their excess game. Many things were available for purchase or trade at the Hob, including Greasy Sae's soup, goats, or white liquor made by Ripper. It was burned down by Peacekeepers in Catching Fire.

The Victors' Village is a small area where the victors of previous Hunger Games dwell. The houses are grand and luxurious compared to the rest of District 12 - however, the village was wholly neglected for years due to a lack of victors in District 12, housing only four victors in the span of 75 Hunger Games. The first victor died sometime before the 74th Hunger Games, leaving Katniss Everdeen, Peeta Mellark, and Haymitch Abernathy as the only residents.

The Justice Building was used for formal administrative tasks, including marriage registrations. Tributes would bid goodbye to their loved ones within the building, and the eldest children of miners killed in accidents would receive medals of honor here, including Katniss and Gale.

"Maybe it's old-fashioned, but no one really feels married in District 12 until after the toasting."
―Catching Fire[src]

Weddings in District 12 were simple events conducted with humble materials. Traditionally, women would rent a well-worn white dress, while men donned clothing outside of their normal mining clothes. The couple would register as spouses at the Justice Building to be assigned a home. For a ceremony, there would be a small gathering of close friends and family members enjoying a meal and if available, a piece of cake. The reception would then sing a traditional song to welcome the couple into their new home as they cross the threshold. Afterwards, the newlyweds make their first fire and toast bread to share together.

The square was where the annual Reapings were held. Citizens would be forced to gather and watch that year's tributes be selected.

Relationship with the Games

Since District 12 was the poorest of Panem's districts, its tributes are almost guaranteed a quick death. Prior to the 74th Hunger Games, the district had produced only two victors. Most of the district's tributes are malnourished and unaccustomed to the glamour of the Capitol, often being regarded as "uncivil" by Effie.

Most tributes were inexperienced with weapons compared to other districts, holding them at a major disadvantage since residents were only allowed to become miners at 18. Sponsors typically refuse to support District 12 tributes given the lowest number of winners in the past. Katniss and Peeta were exceptions - Katniss's survival skills sharpened by her illegal hunts and Peeta's strength and charisma as a baker made them fearsome competitors. Lucy Gray Baird was also an exception, with her skills at entertaining the crowds with songs and strong performance in the games, which was strengthened by Coriolanus Snow's selling the Capitol on the idea that she was not District girl but Capitol born.

A twenty-foot high electric fence surrounded the district. Although officials and Peacekeepers claimed it was electrified twenty-four hours a day, Katniss was easily able to identify whether this was the case as she nearly crossed the fence on a daily basis. While officials informed the public that the fence was meant to ward away wild animals, it was more likely to prevent people from escaping. When Romulus Thread became Head Peacekeeper of 12, the fence's electricity was reactivated.

The last escort for District 12 was Effie Trinket, a bubbly, pink-haired, air-headed lady from the Capitol. An unidentified escort was seen in the recap of Haymitch's Games. Effie was reluctant and slightly unwelcoming to the tributes, feeling she was bound to be promoted to a better district.

An unknown woman is the escort during the 50th Hunger Games.[1]

At the end of Catching Fire, the Everdeen family, Gale, and Katniss en route to District 13. Gale informs her that there is no District 12. The district was destroyed with incendiary bombs by the Capitol, only sparing the Victors' Village. Gale is able to evacuate roughly 900 out of 10,000 citizens, while the rest are presumably killed in the bombing.

During the Second Rebellion, the rebels utilized District 12 as a transportation base to send troops to the Capitol. Katniss and Squad 451 were taken there before being transported to the Capitol. After Panem's second war, Katniss and Haymitch returned to District 12, and Peeta eventually returned as well. Most of the remains of District 12 citizens were buried in a mass grave. A medicine factory was constructed, and District 12 began to rebuild. The filled-in mass grave is now a meadow. In the epilogue, Katniss and Peeta take their son and their daughter to the Meadow. They agreed to tell them someday about the people buried there and what they died for. 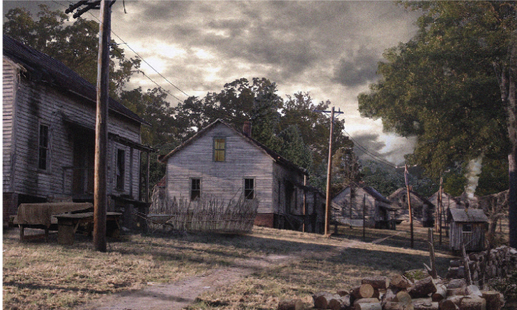 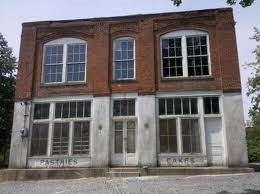 Katniss walking around the Seam

Wideshot of District 12 at dawn. 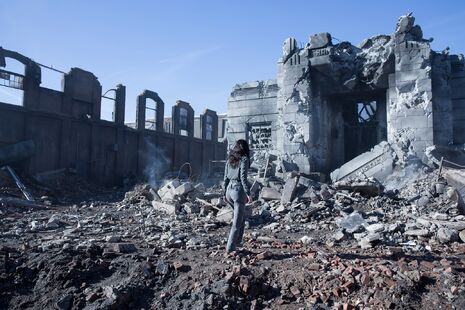 District 12 after being destroyed by The Capitol