The Hunger Games Wiki
Register
Don't have an account?
Sign In
Advertisement
in: Capitol Residents, Females, Rebels,
and 2 more
English

"Don't expect much chitchat from him. The Capitol cut his tongue out years ago. And no, it wasn't any sort of rescue, if that's what you mean. We all fled on our own⁠—for this. For you."
―Cressida to Katniss Everdeen, on why her team joined the rebels.[src]

Cressida is a resident of the Capitol and a film director who joined the rebellion along with her camera crew (Castor and Pollux), and her assistant Messalla. They headed to District 13 when they fled the Capitol. Cressida was told by Plutarch Heavensbee to follow Katniss Everdeen throughout her journeys in the rebellion so they could make numerous propos across Panem in order to encourage strength and morale in the rebels.

Cressida is introduced as one of the most up-and-coming film directors in the Capitol, before she up and left. She along with her assistants Castor, Pollux, and Messalla, are introduced with her. The four of them tell Katniss that they left the Capitol by choice to join the Mockingjay in District 13.

Cressida was first by Katniss's side in Mockingjay when she ventured to District 8 and led her camera crew through the chaos of an unexpected bombing by the Capitol. They followed Katniss to the roof of a building where she, Gale Hawthorne and Commander Paylor helped shoot down the Capitol's bombing hovercrafts. She also made sure to get Katniss' threat to the Capitol as well as footage of the Hospital the Capitol had just destroyed filled with unarmed, wounded District 8 residents. Cressida, unlike many of the other Capitol-born rebels, is unfazed by the poor living conditions of District 13 and the devastation of the war, which makes her a good film director. Katniss herself was impressed by the fearlessness of Cressida and her team in making sure to get top-quality footage of the Mockingjay despite the danger; she says that, like her stylist Cinna, they don't just do their work, they take pride in it. Less than a day after the bombing in District 8, Cressida and her team had put together the first Mockingjay propo and aired it multiple times; the before/after results were dramatic, with the rebels rallying in all the districts and taking total control of Districts 11 and 3.

Cressida continued to get footage of Katniss here and there, but her next biggest propo was during the team's visit to the remains of District 12; she took footage of Gale, who had helped evacuate the survivors, and of Katniss singing The Hanging Tree. Later, after the bombing of 13, the crew also got footage of all the white roses that President Snow had made sure to drop for Katniss. Cressida, seeing Katniss was losing control of her emotions, tried to make it easier for her by giving her specific lines, but Katniss eventually burst into tears over Peeta being tortured to break her.

After a mission to rescue Peeta was made, Cressida coaxed Katniss back into another propo, asking her about her past experiences with Peeta, which seemed to comfort and strengthen Katniss. She firmly stated to the camera that if the districts all declared their independence from the Capitol, it would be unable to survive, so she was declaring her independence then and there; Cressida and her crew were pleased. The rest of the propo was of Finnick Odair explaining how the President got into power by poisoning threatening competition, even going as far as to take some himself to avoid suspicion, which is what caused the sores in his mouth which always bleed. Finnick also explained how he and all the other victors, before Katniss and Peeta, were exploited, threatened and bought by the Capitol to make sure they were kept in place. Finnick let out his payment of secrets in this propo about every one and spread the word all across Panem, severely discrediting Snow. Even Cressida was shocked by Finnick's stories.

Cressida also created a propo at the suggestion of Fulvia Cardew which contained a video memorial to all the fallen tributes who could be remembered and recognized by the surviving victors.

Cressida and her crew also accompanied Squad 451 into the Capitol. She got footage of their training for battle as well as the death of Leeg 2 for her next propo. The propo was officially stopped by Cressida as their mission got much more serious with Boggs losing his legs to a pod and Peeta throwing Mitchell into a pod in an act of rage, this pod was a barbed wire net. While trapped in the net he was killed as a wave of a black tar-like substance engulfed him. Before Boggs died he gave the Holo to Katniss and Cressida supported a lie that Coin had wanted Katniss to specifically kill Snow when Jackson started to question Boggs intentions. Katniss is confused as to why Cressida continually supports her decisions over the more logical and safe options.

Katniss led the Squad through the streets of the Capitol and then into the house of a resident when they came to the area where the pods stopped being activated after the explosion Boggs triggered. There they find that on TV, Snow believes them all to be dead as he sent Peacekeepers to shoot through the house they originally took refuge in, where they left Boggs' body, and he had them set it on fire once all was cleared, he planed on having their bodies fished out by morning. This gave Katniss some time to lead Cressida, Pollux, Castor, Messalla, Peeta, Finnick, Gale, Homes, Jackson and Leeg 1 down to the bowels of the Capitol.

They made it through quite a bit of the Capitol this way until Snow discovered that they had not been killed in his attack and he sent some rose scented, lizard-like mutts after the group. Despite the fact that the camera team didn't have military training, Katniss, Peeta and Gale gave Cressida, Pollux and Castor their guns to defend themselves, as Katniss and Gale had bows and Peeta was restrained. When running, Cressida's assistant, Messalla, activated a pod that melted his skin like candle wax. They carried on until they came to a pod called the Meat Grinder, Leeg 1 and Jackson as they stayed behind to stop any Mutts from coming through the Meat Grinder, but they were unsuccessful and lost their lives. Cressida, Pollux, Gale, Katniss and Peeta managed to make it above ground when Finnick, Castor, and Homes lost their lives holding back the Mutts. Cressida stoically continued to show Katniss loyalty, but she was visibly upset over the deaths of all her crew members (except Pollux, who survived).

Cressida then led the remaining 5 members of Squad 451 to an old friend of hers and ex-stylist of the Hunger Games, Tigris, who was also a part of the rebellion. Tigris housed them for a while until the rebels started moving into the Capitol and caused many residents to go homeless, the refugees were forced into Tigris' shop after Squad 451 escaped. Cressida and Pollux split from Katniss and Gale and would meet up with them at the President's mansion while Peeta caused a distraction. Though when the Capitol activated pods and the rebels killed residents along the streets somewhere along the lines, Cressida and Pollux were thought to be killed in the turmoil. However, they survived, as it is shown that, in the end, they go around districts to film the war damage.

Cressida's final appearance in the films is at Snow's execution, which she and Pollux are filming.

Cressida is described in the book as a young woman whose head is shaved bald and tattooed with vivid green vines. In the film, only the left half of her head is shaved and tattooed, and the vine tattoos extend down her neck and along her arm as well. 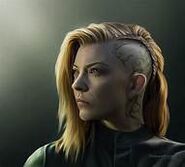