"No one speaks. I can’t pretend I knew any of them well. But I’m thinking of those three kids hanging on to Cecelia when they took her away."
―Katniss Everdeen remembering Cecelia.[src]

Cecelia was the District 8 female tribute who participated in the 75th Hunger Games[1]. She was also the victor of an unspecified Hunger Games.

Cecelia is the victor of an unknown Hunger Games, likely any one between the 57th and 61st edition of the Games as Katniss stated that Cecelia was about 30 years old at the time of her reaping for the 75th Hunger Games[1]. Sometime after her victory, Cecelia presumably got married and had three children.

Cecelia was reaped as the female tribute for District 8 in the third Quarter Quell. At the reaping her three children clung to her, refusing to let her go[1], something which Katniss remembered later in the Games. Effie expressed dismay and commented "Oh no, not Cecelia" when she learned Cecelia was chosen, possibly indicating that Effie feels sympathy towards Cecelia because of her three children[1].

In the books, she wasn't described during the chariot rides. In the film adaptation, she's seen behind the District 10 tributes when Finnick comes to talk to Katniss. Cecelia is seen wearing a long black dress with large white wires on her shoulders.[2]

In training, it is revealed that her fellow tribute from District 8, Woof, stayed fairly close to her. They eventually invited Katniss to the bug station, who tried asking them about the uprising in District 8, but changed her mind at the last second.[3] Her motherly instincts caused Katniss to want to become her ally.

Cecelia's outfit seems to be a grinding combination integrating red and black with design circulars in the interviews[2]. Cecelia joined hands with the other twenty-three tributes as a sign of rebellion at the end of the interviews[4][2].

Cecelia was killed in the initial Cornucopia bloodbath. She was stationed on the pedestal next to the District 10 male[5]. She battled with Enobaria with her sword but was bitten in the neck by Enobaria who then proceeded to stab her in the back. She placed somewhere between 17th and 23rd. Katniss was dismayed by her death and grieves for her, the male morphling, and Seeder later that night. She remembers Cecelia's removal at the time of the Reaping.[5]

At the end of Catching Fire, when Katniss flies towards District 13, Haymitch revealed that Cecelia was one of the victors who knew of the rebellion and was part of the alliance to save Katniss[6].

Cecelia had three children at home by the time of the third Quarter Quell who were very upset to see their mother going into the Games[1]. The children's names and gender are unknown. The father or fathers of those children as well as her husband if any are also unknown.

Cecelia was described as being around thirty or so, and was one of the younger victors[1]. She is depicted with brown hair in the film, Catching Fire[2]. 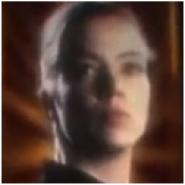 Cecelia on her pedestal beside the District 10 male