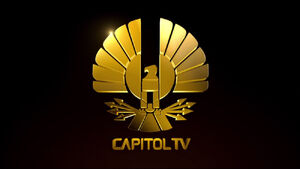 Capitol TV is the main television network within The Capitol, it is being used for promotional purposes in regards to the film The Hunger Games: Mockingjay - Part 1, where President Snow addresses the nation of Panem. The TV network is also known for broadcasting the Hunger Games.

Capitol TV was not mentioned in the original The Hunger Games trilogy as an official network as it was created by Lionsgate, but it does appear in The Ballad of Songbirds and Snakes, alongside another organization called Capitol News.

Lucretius "Lucky" Flickerman worked as a weather reporter for Capitol TV and was later tapped to host the 10th Hunger Games.[1] Capitol TV also covered the funeral of Arachne Crane,[2] as well as the bombing of the Capitol Arena.[3]

President Snow's Panem Address: Together As One, was the first address from President Snow. The address was made in efforts to preserve a peaceful and prosperous Panem with Peeta Mellark standing by President Snow.

It was released to the public on 25th June 2014 as the first teaser trailer for The Hunger Games: Mockingjay - Part 1.

"The Mockingjay Lives."
―Beetee Latier, after hacking into the TV network.[src]

President Snow Presents: Unity, is the second Panem address by President Snow. In this address to the nation, victors Peeta Mellark and Johanna Mason stand by President Snow as he commends citizens for their cooperation and unwavering dedication to a unified Panem.

Halfway through the video, Beetee Latier appears on the screen and announces that "The Mockingjay Lives" before his transmission is cut short. 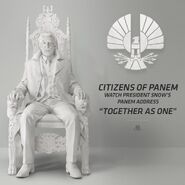 Poster for Panem Address "Together as One"

Poster for Panem Address "Unity".
Add a photo to this gallery

Professional bodybuilder and fighter Shane Fazen demonstrates the meticulous regimen his trainees endure in order to join the ranks of Panem’s elite forces.

Hosts of the YouTube channel ThreadBanger, Rob and Corinne review the fabric material and resourceful style it has on the clothing industry of Panem.

Retrieved from "https://thehungergames.fandom.com/wiki/Capitol_TV?oldid=924378"
Community content is available under CC-BY-SA unless otherwise noted.