"Thinking like your prey... that's where you find their vulnerabilities."
―Beetee[src]

Beetee Latier is the male tribute from District 3 who participated in the 75th Hunger Games, was the victor of a Hunger Games, and is one of the 6 (others being Katniss Everdeen, Peeta Mellark, Johanna Mason, Finnick Odair and Enobaria) people who survived the 75th Hunger Games. Though not a great fighter, Beetee is an expert with electronics and wiring.

Beetee was the winner of an unknown Hunger Games, likely any one between the 31st and 43rd edition of the games. Because he was from District 3, it was assumed that he didn't have as much of a chance in the arena as the other tributes. He got electronic supplies from the Cornucopia and crafted an electronic trap which killed off the final six remaining tributes making him the Victor. Since he was older than his district partner, Wiress, it is likely he served as her mentor for her games in the years that followed his victory. 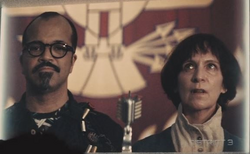 In the Tribute Parade, he and Wiress wore electric bulb studded outfits, which Katniss noted that the District 3 stylists may have taken inspiration from Cinna and Portia's design the year before.

Before the Games began and Wiress became unhinged, she was shy and easily distracted, so Beetee almost always finished her sentences for her. Furthermore, Beetee was the only person who could really understand anything she said after the Games began, leaving her entirely dependent upon him.

Beetee was given the nickname "Volts" by the other victors after he won by using his knowledge of electricity. Together with Wiress, they were called "Nuts and Volts" by Johanna Mason. The nicknames are also a pun, a variation on the phrase "nuts and bolts". He and Wiress gained Katniss' trust when they were training for the Games. Wiress and Beetee were two of the many tributes who were enlisted by Haymitch to protect Katniss and Peeta in the arena, at every cost.

During his interview with Caesar Flickerman, Beetee wore a dark colored suit and questioned the legality of the Quell in his nervous, twitchy way and wondered if it'd been fully examined by experts. He, along with every other victor, held hands as a sign of solidarity and rebellion at the conclusion of the interviews.

His companion, Wiress, never left his side during the 75th Hunger Games.

Beetee's pedestal was positioned on the pedestal next to Blight. In the bloodbath, he was seen floating around the water with the flotation belt, trying, but struggling to keep above the water, and then it finally hits Katniss that the belts are flotation devices. He also got a knife in the back at the Cornucopia (while trying to get wire), causing severe injury. In the film, he is seen wading through the water as Blight runs on a spoke.

Beetee, along with Johanna, Blight, and Wiress, experienced the 'blood rain,' one of the clock dangers of the arena. When they found Katniss, Peeta and Finnick, the trio was taken down to the beach to be cleaned up. Wiress was then killed by Gloss and then propelled into the water with Beetee's wire when the beach began to spin. It was almost lost until Katniss saved it and gave it back to Beetee. He then explained his plan to kill off Enobaria and Brutus using the wire, and he sent out both Johanna and Katniss to run the wire through the jungle while Finnick and Beetee readied the fake tree and prepared to destroy the arena. Beetee was wounded by Enobaria, however, and as Finnick chased after her, Katniss came to Beetee's aid and completed his mission to destroy the arena.

Beetee, Finnick and Katniss were taken by Plutarch Heavensbee to safety in District 13, while Johanna, Peeta and Enobaria were all taken hostage by the Capitol. Through the work of the District 13 doctors, Beetee managed to survive his injuries.

When Beetee recovered, though still in a wheelchair, he started working for the rebels by making new weapons for the military and a new bow and arrow for Katniss to use as the Mockingjay. When Katniss and Gale arrived at the meadow built underground, Beetee was studying and observing hummingbirds and asked Katniss if she could shoot one down. Gale said that maybe the hummingbird could be trapped if not shot. Beetee then took them to the special military weapons room where he showed them the weapons he built for the rebels. Beetee allowed Gale to pick a weapon and he chose a bow and arrow. Beetee made Katniss a new bow explaining that President Coin wanted a weapon that was unique to Katniss, and that matched her Mockingjay outfit. Beetee did so, but improved upon that idea by making the bow interact bio-mechanically especially with Katniss. He also made a new and improved trident for Finnick.

Beetee continued to make weapons and hack into the Capitol's broadcasts to air the Rebels' propaganda spots. Beetee had Haymitch arrange to have Katniss shoot a propo so they could use it as a distraction tool during the rescue mission to free the victors being held in the Capitol. When Katniss visited Beetee and Gale, she was shocked to find that they were making weapons that could hurt innocent people in the process. Gale replied that they were playing by the same rule book President Snow used.

Beetee and Gale went to the Nut in District 2 to assist the Rebels and met Lyme. The group tried to come up with a plan to attack the "Nut," which would give them control of District 2. Gale suggested that they blow up the inside of the "Nut," which upset Katniss since it would kill the innocent as well as the District 2 Peacekeepers. Beetee supported the plan, calling it "brilliant," which only upset Katniss even more.

During the final battle of the war, a bomb Beetee and Gale presumably made killed Capitol children and Rebel medics, which included Prim, who died in Katniss' arms after the bombs went off the second time.

After the Rebels' victory, President Coin gathered the seven remaining victors and asked if they should have one final Hunger Games with children of the most powerful citizens in the Capitol as final retribution for the tyranny of the Capitol's rule. Johanna, Enobaria, Haymitch, and Katniss voted yes, while Peeta, Annie, and Beetee voted no. It is assumed that Beetee eventually returned home to District 3. 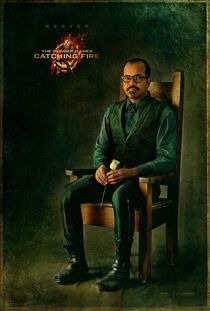 Beetee is described to have ashen skin (which is assumed that his skin is a typical district 3 attribute), black hair and ill-fitting glasses. Katniss stated that he was older than Wiress, so it is estimated he should be in his 50′s. When he is speaking on matters other than technology, Beetee is described as nervous and twitchy.

Beetee was described as, despite being a competitor in a fight to the death, one of those people who you trust immediately, being the only person apart from Peeta who Katniss fully trusted in the 75th Hunger Games. He was highly intelligent and his greatest weapon was his knowledge of electricity. Beetee seemed quite harmless for the most part but nevertheless he had won the Hunger Games in the past, although this was almost certainly just self-defense rather than pleasure in killing. During President Coin's vote on whether to hold the 76th Hunger Games with Capitol children, Beetee voted against it despite having fought against the Capitol during the war, saying they needed to stop viewing one another as enemies.

Beetee is known to be older than Wiress, his district partner in the 75th Hunger Games, which suggests that he could have been her mentor in her first Hunger Games. His ability to complete her sentences indicate that they were good friends who shared similar lines of thought, maybe through years of mentoring together. She stuck with him in the 75th Hunger Games and he was saddened when she died.

Beetee and Gale spent a lot of time working on weapons in District 13. It is assumed they got along well as they shared similar sanguine views on fighting and the war. It is believed, though not confirmed, that they helped design the bomb that President Coin used to kill the Capitol children and Primrose Everdeen, who stood outside President Snow's house.

Beetee was the person who Katniss trusted the most, other than Peeta, during the 3rd Quarter Quell. When he started working with Gale in the weapons center, Katniss started to lose trust in him because he was helping in the creation of many harmful weapons, possibly including the bomb that took her sister's life.