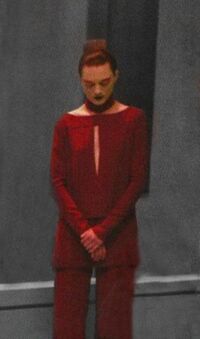 An Avox is a person who has been punished for being a rebel against the Capitol; a traitor or a deserter. Most Avoxes will have been hunted and caught by the Peacekeepers of their respective Districts. Avoxes have had their tongues cut out, rendering them mute.[1] They are used as domestic servants and waiters upon tributes and Capitol citizens[1][2]. It is also suggested that Avoxes are charged with the day-to-day maintenance of the Capitol and work shifts in the Transfer network under the city.

People do not speak to Avoxes unless giving them an order. They spend their lives serving the Capitol at the lowest class; they are slaves.

Katniss recognizes a redheaded Avox while staying in the Capitol during the 74th Hunger Games training period. She saw this particular female Avox in the forest surrounding District 12 while she was hunting with Gale. The Avox was with another boy. The boy was killed by a harpoon to the chest, and the girl was caught in a net dropped from a hovercraft. When the girl was trapped in the net, Katniss believes she sees her cry out, "Help!". When Katniss points her out, she is scolded by Effie for talking to her. She asks how Katniss knew her, when she clearly shouldn't. Katniss panics, but Peeta covers for her by saying she looks like a girl from District 12, Delly Cartwright.[1]

Another known Avox is Darius, a former Peacekeeper in District 12. He was a friend of Katniss.[2] He became an Avox after trying to stop Romulus Thread, the new Head Peacekeeper of District 12, from whipping Katniss' friend, Gale[3]. While in the Capitol, preparing for 75th Hunger Games, Katniss recognizes the Avoxes sent to serve the District 12 tributes as Darius and the red-headed girl, Lavinia[2].

While on the District 12 floor of the building where tributes are kept before the 75th Hunger Games, Katniss purposefully dropped her bowl of peas on the floor. When Darius bent to pick them up, she did too and looked him straight in the eye while they were out of sight. Effie then told her to get up when she took a while looking at Darius and speaking wordlessly everything she wanted to tell him.[4][5] The Avox shown in The Hunger Games film and Catching Fire film is unknown, but it's presumably Lavinia.

Another Avox is Pollux, one of Katniss' cameramen in Mockingjay[6].

The Avoxes facial appearance is no different than their normal, everyday lives. In Hunger Games, they wore crimson robes, gold flats, and had their hair tightly pulled back[7]. In Catching Fire, the Avoxes wore white sleeveless gowns, haunting dark eye makeup, and cages around their faces[5]. They have no tongue, as they lose it when they become an Avox.