The Hunger Games Wiki
Register
Don't have an account?
Sign In
Advertisement
in: Females, Tributes from District 4, Rebels,
and 4 more
English

"Did you love Annie right away, Finnick?" I ask.
"No," A long time passes before he adds "She crept up on me."
―Finnick Odair answering Katniss Everdeen's question about Annie[src]

Annie Cresta is a victor from District 4 known for winning the 70th Hunger Games. She is the widow of Finnick Odair and the mother of their son.

During the 70th Hunger Games, Annie witnessed her district partner get beheaded and thus isolated herself for most of the games. This presumably worked for her up until an earthquake broke a dam, flooding the arena. Having grown up in District 4, Annie survived by being the best swimmer.

Since then, she has suffered from mental instability: she often closes her eyes and covers her ears, laughs at unusual times, and falls into a stupor. It seems that the only person who could calm her was Finnick Odair, a victor of the 65th Hunger Games and her lover.

Since Katniss could not recall who Annie was though she won only a few years before Katniss, it’s possible that she was not celebrated as much as other victors such as Gloss or Enobaria by The Capitol. As Katniss could not recall Annie being present among other victors in previous games and only remembered her as the ‘one who went a little [crazy],‘

In Catching Fire, Annie was reaped to participate in the 75th Hunger Games, but Mags, an older victor who mentored Finnick Odair and Annie during their Hunger Games, volunteered to enter the Games in her place. After the jabberjay attack in the arena, Finnick tells Katniss Everdeen about Annie.

In Mockingjay, Annie was arrested by the Capitol and was supposedly tortured. Finnick Odair explains to Katniss Everdeen that they didn't take her as a hostage because she did not have any information about the rebels: instead, the Capitol perceived that Finnick would never endanger Annie by telling her anything, and took her simply as a weapon to use against him. After Finnick suffered a mental breakdown, a group of rebels broke into the Capitol and got her out, taking her safely into District 13. Upon her arrival, Annie was reunited with Finnick and the two embraced.

In District 13, she and Finnick were married in the traditional District 4 style where their wedding cake was decorated with waves and dolphins by Peeta Mellark. Annie wore the dress Katniss had worn in District 5 on her Victory Tour. Katniss notices that, since their marriage, Finnick does not let go of Annie's hand and that Annie seems "lost in some daze of happiness." Later on, Annie and Finnick meet Katniss, Gale Hawthorne, Johanna Mason, Beetee Latier, Delly Cartwright, and later a rehabilitating Peeta at lunch. When Johanna tells Peeta that they are familiar with each other's screams, she covers her ears. Katniss figures that Annie is not all that bad, just maybe a little mentally unstable. Peeta jokingly tells Finnick to take care of Annie or he will take her away from him.

Later on, Finnick suggests to Peeta that he asks Katniss what's real and what's not real, claiming that it's what Annie does when she tries to remain sane.

On a mission to infiltrate President Snow's mansion, Finnick is decapitated by several lizard mutts. Katniss describes how she watches his life flash by as if she were Finnick, which includes seeing Annie in her wedding dress. Katniss tries to kill the mutts, but she was too late to save Finnick.

Annie returns to her home in District 4, where she gives birth to Finnick's son. She sends Katniss a photo of him to be put into her book.

Annie suffered from Post Traumatic Stress Disorder (PTSD) due to her traumatic experiences in the Hunger Games. Katniss Everdeen described her as 'strange' but stated that she was not mad, as most others believed, simply unstable and seemed to like Annie since they kept in touch after the war was over. Annie would occasionally withdraw into herself so that it seemed she was in a different place which would result in her staring into space with a blank smile on her face until she was brought back to reality. She sometimes laughed when there was nothing to laugh about and closed her eyes and covered her ears with her hands to block out the memories from the Hunger Games. When she was reaped in the 75th Hunger Games, Annie started screaming hysterically. Only Finnick Odair was able to calm Annie down when she started having a fit.

Although Annie had some severe mental difficulties, she was a very kind-hearted and forgiving young woman, voting no when President Coin suggested doing a 76th Hunger Games using the Capitol's children as tributes in order to punish them for three-quarters of a century of tyranny and terror. She did not seem to be dangerous and despite the fact that her mental problems were caused by the Hunger Games and Finnick (the love of her life) was killed by the Capitol, she showed no interest in revenge. As it is not stated that Annie was a volunteer Career Tribute, she may not have actually been, even though she came from a Career District. It is assumed that the only reason she survived the Hunger Games was that she was a stronger swimmer than the other tributes, suggesting that she may not have needed to directly kill anyone.

Annie was married and widowed by Finnick Odair, the former victor of the 65th Hunger Games where they had one son and she has no other known family. 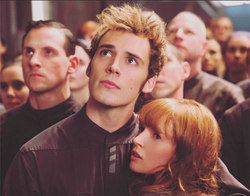 The two had a deep love for each other where Finnick mentored Annie, and most likely did everything to keep her alive. During the interview with Caesar Flickerman, Finnick recited a poem for Annie ('his one true love' he said), but almost every woman in the Capitol thought the poem was aimed towards them. During the third Quarter Quell, Finnick heard Annie's screams during the jabberjay attack because she was who he cared about above all others. He was worried that the Capitol had hurt Annie.

In Mockingjay, Finnick constantly worried about Annie and could not concentrate on anything else but her. He was out of his mind because Annie had been captured by the Capitol so they could torture her for information about the rebels. To set his mind straight, he tied different knots with a foot of rope and brought it everywhere with him, hoping to regain sanity and distract himself from worrying about her. He broke down when he couldn't handle it anymore and soon after, the rebels rescued those captured by the Capitol, which included Annie. Finnick and Annie reunited in District 13. The two would later get married and conceive a son. Finnick was killed before Annie gave birth to their son.

It is safe to assume Annie and Mags knew each other well, and that Mags was likely her Mentor alongside Finnick. Both were described to be Finnick's family, so they may have been close, as Mags volunteered as tribute to save Annie and clearly knew she would never survive.

In the movies, Annie has red hair.