"On the 75th anniversary, as a reminder to the rebels that even the strongest among them cannot overcome the power of the Capitol, the male and female tributes will be reaped from their existing pool of victors."
―President Snow announcing the 75th Hunger Games[src]

The 75th Hunger Games, also known as the third Quarter Quell, was the final Hunger Games ever held in Panem. Since this was a Quarter Quell, an extra twist was introduced. In this case, to remind all the districts that even the strongest among them cannot overcome the Capitol, each district reaped their tributes from their existing pool of victors (59 in total). For these Hunger Games, Plutarch Heavensbee replaced Seneca Crane as head Gamemaker. This was the last Hunger Games held in Panem, but it ended with no victor.

While preparing for the Games, the tributes all seemed to like each other, even publicly joining hands as a symbol of sorrow and defiance towards the Capitol. However, when they went into the arena, the killing resumed as usual.

In this year's Games, the tributes from Districts 3, 4, 6, 7, 8 and 11  had varying degrees of knowledge about the plan to break the tributes out of the arena. They also agreed to die in order to keep Katniss alive, because she was the symbol of the rebellion and while she lived, the revolution lived.

All 24 tributes were previous victors. Additionally, the games were unique as it was the first time that two tributes from the same district (Katniss and Peeta) both scored a 12 out of 12 in training.

In the film, Katniss jumped off her pedestal and dove into the water. She climbed up a rocky wedge, spotting Brutus and the District 5 male to her right. She raced Brutus to the Cornucopia and was neck and neck with Gloss in a dash to the Cornucopia until he slips and falls onto his spoke. Looking around, she sees Blight running to the Cornucopia, the female morphling and the District 5 female running into the woods and Woof falling off his plate. When she reached the Cornucopia she acquired a bow and quiver of arrows. She aims at Gloss and shoots him in the calf, and he promptly falls into the water. She then fires at Enobaria, who dives back into the water, avoiding the arrow. Katniss hears a noise behind her, only to see Finnick Odair with his trident. He reveals the gold band, indicating to Katniss she is meant to align herself with him. The District 5 male approaches her with a spear, but Finnick swiftly impales him. He orders Katniss not to trust Disticts 1 and 2 and that he will find Peeta. Finnick then tells Katniss that Mags found Peeta and they both rush to Mags' rocky wedge only to find Peeta and the District 9 male grappling. Finnick dives in to try and help Peeta, but they both pull each other into the water. Seconds later the cannon booms, and a body floats to the surface. Katniss is startled until Peeta comes up for air. She turns to see the Careers have staked out the Cornucopia, and she leaves with her allies for the jungle.

(From the left to the right) Cecelia and the District 10 male on their pedestals.

(From the left to the right) Finnick, the District 9 female and Chaff on their pedestals.

Cashmere at her tribute platform

The countdown for the bloodbath reaches 5

Katniss stares at Brutus as they surge from the water

Blight running to the Cornucopia (front), the Female Morphiling runs into the jungle (back), Woof falls off (right), the District 5 female is on the beach (left).

Katniss and Gloss rushing to the Cornucopia

Katniss shooting an arrow towards Enobaria

Enobaria dives into the water 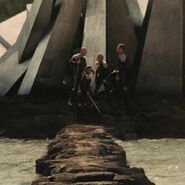 The Career alliance dominates the Cornucopia during the bloodbath

Katniss' alliance seeks shelter in the jungle. However Peeta strikes a force field causing his heart to stop. Fortunately, he is revived by Finnick. Haymitch sends the alliance a sponsors gift of a spile (although it takes them a while to figure out how to use it). Katniss hears 12 gongs which signal the beginning of the hourly horrors.

Following a lightning storm and rain which doesn't seem to move closer to the alliance a cannon is heard (signalling Blight's demise). Katniss then notices the uniformity of approaching mist and rouses the others. After fleeing through the jungle Katniss and the others find their motor controls failing along with burns appearing. In order for Finnick to save Peeta, Mags sacrifices herself by walking into the fog.

The remaining members collapse in the jungle and notice monkeys lining the trees. They crawl to the pond (Movie) /Centre lake (Book) and purge themselves of the fog poison. Peeta tries to tap a tree for water upon which the monkeys are again noticed by Katniss and Finnick. The monkey's attack the trio. When Katniss runs out of arrows she beckons to Peeta for more momentarily distracting him. However, when a monkey attacks him the female morphling appears from behind the foliage and sacrifices herself to save Peeta, putting herself in between him and the monkey. She dies while being comforted by Peeta in the water.

Katniss and the alliance rest whilst Finnick remains on watch whilst grieving for Mags. In the morning they receive a sponsors gift of ointment for their skin. Finnick and Katniss scare Peeta awake and receive another gift of bread from District 4. The 10 o'clock wave occurs and a cannon is heard along with the District 5 female's scream.

Katniss notices three individuals appearing out of the jungle: Johanna, Wiress and Beetee. Beetee is badly injured and Wiress keeps mumbling "Tick tock". This leads Katniss to the revelation that the arena is set up like a giant clock. The alliance heads to the cornucopia to resupply and Wiress is killed by Gloss. In retaliation Katniss shoots Gloss and Johanna kills Cashmere. The cornucopia starts to spin distorting the alliances ability to tell time.

Finnick and Katniss become trapped in the jabberjays section and are forced to listen to artificial sounds of their loved ones being tortured. Another cannon sounds in the nearby wedge causing a tribute, the District 10 male, to be collected in pieces.

The alliance settles down for the night again and Peeta attempts to persuade Katniss not to sacrifice her life for his.

The next day, Beetee comes up with a plan to kill off the remaining Careers, Brutus and Enobaria. He planned on using the lightning tree and his coil to shock them both to death after Katniss's alliance fled the beach.

Katniss and the others make it to the tree in ample time, and Beetee has Katniss and Johanna take the wire and take it to the beach as quickly as possible so they could trap the Careers. As they brought the wire down, Brutus and Enobaria spotted them, and Johanna attacked Katniss, slicing out her tracker, and telling her to stay down so they would think Johanna killed her.

After feeling she was safe, Katniss left the area to look for Peeta, and, returned to the lightning tree. Finnick soon calls out for her, and Katniss raises an arrow at her, but Finnick reminds her to remember who the real enemy is. With these words, Katniss attaches the wire to her arrow, and shoots the forcefield surrounding the arena, destroying it with the lightning. In this time, Chaff was found by Brutus, and was killed. Peeta, upon seeing this, killed Brutus in a fit of rage.

After destroying the forcefield, Katniss, Finnick and Beetee were recovered by District 13 rebels, while Johanna, Peeta and Enobaria were taken hostage by the Capitol.

The 75th Hunger Games was exceptionally unique as it was the only Games to have no victor. It also had the largest alliance consisting of fourteen members. This Hunger Games is also one of the shortest games, if not the shortest, lasting a total of 3 days.

Final 6  (in order by District)

Final 6 (in order by District)

The arena was designed to mimic a clock, which Wiress was the first to discover. For every hour, some form of torture designed by the Gamemakers would be activated in a specific section of the arena. It was split into 12 sections, each for a different hour of the day. The arena was shaped like a circle and was very small. The Cornucopia was on an island in a large, round pool of salt water. Encircling the water was a jungle. The only fresh water was rainwater stored inside the trees. There were various foods in the arena, including nuts, "tree rats," and shellfish that some of the tributes cooked by bouncing off the forcefield.

The outfits in the book were fitted blue jumpsuits made of sheer, billowy material with zippers down the front. Each suit came with a six inch wide padded belt covered in plastic, which was filled with purple liquid and could be used as a flotation device. The shoes were nylon with rubber soles.